Houston, TX WW/Press/May 7, 2020 – Stephen R. Cochell, Attorney with The Cochell Law Firm was selected for inclusion into the Top Attorneys of North America 2020-2021 edition by The Who’s Whos Directories. 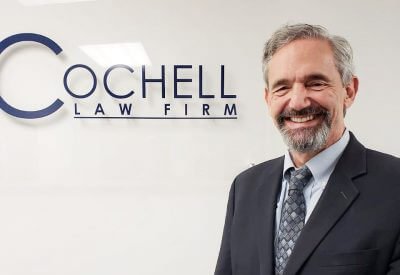 The Cochell Law Firm has over 35 years of experience representing clients in Houston and the surrounding areas in all areas of business law. The firm has assisted clients across several different industries including retail, transportation, real estate, construction, and manufacturing. The attorneys also have extensive knowledge and experience in a variety of legal areas including business litigation, labor and employment law, intellectual property law, corporate and transactional law, and white collar criminal defense. Whatever your business is,  you will need an experience litigator to help guide you  through smart decision making, and effective strategic planning that can protect your interests and help you secure a successful future for your business. At Cochell Law Firm they are committed to taking every aspect of your business into consideration so that you can feel confident knowing that your legal issues are being handled swiftly and professionally — because providing you the peace of mind you need to run your business is exactly what they are there for.

Stephen R. Cochell founder of The Cochell Law Firm, started his practice in 2010. He is admitted to practice law in the state of Texas, the U.S. Supreme Court,U.S. Court of Appeals for the Fourth, Sixth, Eighth,  Eleventh Circuit, the U.S. Court of International Trade, U.S. District Court, Northern, Southern, Western, District of Texas. Mr. Cochell practices in the areas of commercial litigation, corporate and transactional, intellectual property, labor and employment, white collar criminal defense. Mr. Cochell believes that every legal challenge has a solution. It is his job is to examine your unique situation and use our knowledge and experience to find a solution that works for you and your business. Mr. Cochell Firm recognizes the importance of settlement achieving the best result for their clients.

Stephen R. Cochell started his legal career as a Lieutenant Judge Advocate (JAG) for the Navy as part of the Trial Defense Counsel. Mr. Cochell toured to Pearl Harbor, Hawaii, Yokosuka, Japan, and Washington D.C. during his four years as a JAG.

Mr. Cochell spent two years as an Assistant United States Attorney for the Eastern District of Michigan in Detroit, Michigan, focusing on tax and public corruption under RICO and the Continuing Criminal Enterprise Statute.

Next, Mr. Cochell moved into private practice at Wise and Marsac in Detroit, Michigan. He practiced product liability defense, employment litigation, insurance coverage, and other matters relating to commercial litigation.

Mr. Cochell then moved to Memphis, Tennessee to become part of the in-house counsel at FedEx. He served as lead trial counsel in major labor and employment matters, commercial, business tort, and intellectual property matters. Prosecution of a complex trade secrets case against UPS and Fritz Companies, assisted management in formulating an administrative and litigation strategy to address disputes with the Department of Transportation (“DOT”) arising under the Air Carrier Stabilization Act and also served on the defense team defending the Postal Service’s award of the $7.2 billion contract to FedEx.