Attorney McIntyre founded his law firm, specializing in mergers and acquisition transactions in 1993. In the past he was an attorney with the law firm of Paul, Hastings, Janofsky and Walker from 1963 to 1993. He also served as managing partner of McIntyre, Borges & Burns LLP and successor entities from February 1993 to July 1998. Attorney McIntyre was a director of Hawker Pacific Aerospace since February 1998. He also served as a Director of International Aluminum Corp., since 1980.

Mr. McIntyre received a B.A. Degree from Stanford University in 1960 and J.D. Degree from the University of California Los Angeles School of Law in 1963. He was the editor of the Law Degree while in college; He is also a member of the California Bar Association. He is an Avvo Rated attorney and recognized by Martindale-Hubbell as a AV Preeminent Attorney, 2017.

Joel’s secret to success has been in not viewing law as a vehicle for profit but in enjoying and having a passion for the law. 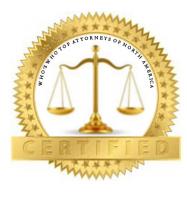 Be the first to comment on "Top Attorney – Joel F. McIntyre"