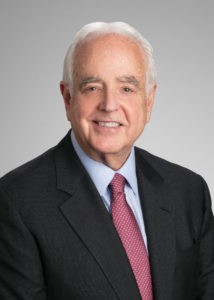 Thomas J. Nolan is a veteran litigator who is widely recognized as one of the nation’s leading trial lawyers.

Thomas J. Nolan, formerly Chair of Skadden’s West Coast Litigation, has extensive civil, criminal and SEC enforcement trial experience representing corporations and individuals in complex commercial litigation in state and federal courts. He has spent over three decades building a national commercial litigation practice in California as well as across the nation.

His accomplishments include winning jury verdicts of more than US $1 billion for his clients and defeating claims before juries exceeding US $5 billion asserted against corporate clients. He has been recognized as a leading lawyer for “first of their kind” trials. In addition to his selection in the national top tier of trial attorneys by Chambers.

Thomas J. Nolan has also been ranked by Chambers’ California rankings as Band One for General Commercial Litigation.

Mr. Nolan is a Fellow of the American College of

Trial Lawyers and a Fellow of the International Academy of Trial Lawyers whose fellowships are by invitation only and limited in number. Mr. Nolan previously served as Chief of Fraud and Special Prosecutions in the Los Angeles United States Attorney’s Office.

He is a past recipient of The State Bar of California Board of Governors President’s Pro Bono Service Award and The Inner City Law Center’s prestigious Katherine Krause Award for his work as the lead trial attorney representing low-income tenants against a Los Angeles City slum landlord which culminated in a record-breaking settlements.

Mr. Nolan is also the recipient of Loyola Law School’s Distinguished Alumnus Award and its Champion of Justice Award. At Loyola Law School’s 50th Anniversary, Mr. Nolan was honored as one of the law school’s 50 Most Inspirational Alumni chosen among more than 16,000 alumni. In 2015, Mr. Nolan received the Excellence in Advocacy Award by the Beverly Hills Bar Association.

Be the first to comment on "Top Attorney – Thomas J. Nolan"