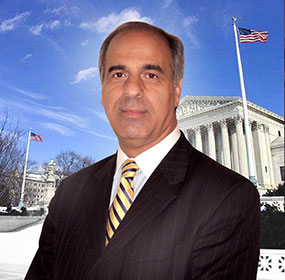 James Irani has been involved with and practicing in the area of immigration law for almost thirty years. He assists individuals and  large and small corporations nationwide in complying with the complex immigration requirements of the USCIS, DOL and DOS to retain highly skilled workers in such fields as information technology, medical research, computer software, engineering, art, and medicine. He is an expert on asylum law. Mr. Irani is fluent in Farsi and English and has lectured at many forums as well as written many articles on Iranian-community related issues. He frequently appears on television programs as an expert on immigration and asylum laws and addresses legal issues currently facing the Iranian community in the United States. James received his J.D. from Brooklyn Law School. He is a member of the Federal Bar Association, American Immigration Lawyers Association, New York State Bar Association, and New York County Bar Association.  James is licensed to practice in the U.S. Supreme Court, New York Federal Courts, and the New York State Courts.

Be the first to comment on "Top Attorney – James S. Irani"