Stephenville, TX WW/Press/ June 13, 2022 –Robert J. Glasgow, Founder and Senior Partner with Glasgow, Isham & Glasgow, P.C., is recognized  and distinguished in the Top Attorneys of North America 2022- 2023 edition of The Who’s Who Directories. 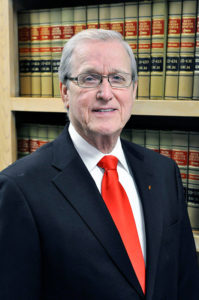 Robert Glasgow’s practice is concentrated primarily on litigation and trial work and is referred to among his peers as the “Lawyer’s Lawyer.” After opening a private practice, he was elected District Attorney for the 29th Judicial District, which at that time comprised the counties of Erath, Palo Pinto, and Hood. He served in this capacity for eight years and then was elected to serve as a State Senator to represent the 22nd Senatorial District, where he served for the next twelve years. During his tenure as a State Senator, he served on many powerful and influential committees, having been appointed as Chairman of The Rules Committee, the Jurisprudence Committee, and the State Affairs Committee. Mr. Glasgow also served as President Pro Tem of the Senate, serving on many occasions as Governor of Texas and was honored in 1991 as Governor for a Day at a statewide ceremony at the State Capitol in Austin, Texas.

Be the first to comment on "Top Attorney – Robert J. Glasgow"