Seattle, WA WW/Press/July 11, 2016 –W. Bradford Bernadt, Attorney with GLP Attorneys, P.S., Inc., was selected for inclusion in the forthcoming Top Attorneys of North America 2016 edition of The Who’s Who Directories. 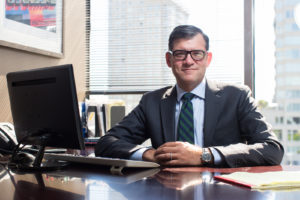 The accomplishments attained by Mr. W. Bradford Bernadt, in the field of Legal Services, warrants inclusion into the Top Attorneys of North America.

Brad Bernadt is a civil litigator and trial attorney, specializing in automobile accidents , construction accidents , slip and falls, and wrongful arrest/excessive force cases. Prior to joining GLP Attorneys, Brad was a Senior Trial Attorney in Howard Beach, New York, where he represented clients in trials, court conferences, motions, depositions, mediations, arbitrations, appellate arguments , and inquests throughout New York State. He also argued appeals in the First, Second, and Third Department New York State Appellate Divisions. Prior to that position, Brad was a Senior Associate Attorney in Great Neck, New York and was an Assistant District Attorney for the Franklin County District Attorney’s Office.

Brad has tried twenty-five jury cases to verdict in his eighteen years in practice. Brad received his B.A. in History and Political Science from the College of Saint Rose in Albany, New York, and his  J.D. from Albany Law School. He is admitted to practice in Washington, New York and the U.S. District Court, and the Southern District of New York. He is a member of the American Bar Association, American Association for Justice, and an Eagle Member of the Washington State Association for Justice (WSAJ). Brad was recognized by Trial Lawyers Care for pro bono service in representing two 9/11 first responders injured during the course of their duty, and tried before the September 11th Victim Compensation Fund.

The Top Attorneys of North America, a New York based publication, distinguishes and profiles leading attorneys who have reached a recognizable degree of success and leadership in their field. The directory is valued for promoting awareness of the accomplishments within the North American legal community..

Be the first to comment on "Top Attorney – W. Bradford Bernadt"