Saginaw, MI WW/Press/July 12, 2016 –Frank M. Polasky (Deceased), Attorney with Frank M. Polasky, P.C., was selected for inclusion into the  Top Attorneys of North America 2016 edition by The Who’s Who Directories. 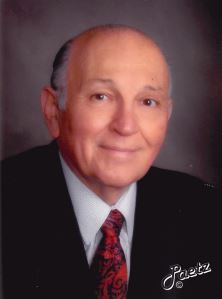 Frank Polasky was a retired tax attorney and IRS registered tax preparer who provided services to small businesses and taxpayers for sixty-three years before his retirement in August of 2014. His practice also included estate planning, trusts, and corporate law. As a licensed real estate broker, he was involved in numerous real estate projects in Michigan. A graduate of the University of Michigan and the Detroit College of Law where he became a member of Tau Epsilon Rho Fraternity, he remains a member of the State Bar of Michigan, American Bar Association, and the Saginaw County Bar Association. He was admitted to practice before the Eastern District of Michigan, the Supreme Court, Tax Court and all Michigan courts. A sought after speaker on tax issues throughout his career, he authored a number of tax articles, including “How to Handle Questionable Deductions and Illegal Expenses” published by Prentice-Hall and co-authored with his late partner Robert H. Meisel. He achieved an AV Rating by Martindale-Hubbell and was recognized as the Best Rated Local Tax Preparer.

Born and raised in Saginaw, Michigan, he graduated from Saginaw High, and then served in World War ll in the United States Army. After having been honorably discharged, completing his education and a short stint as an IRS agent, he returned to his hometown to practice law. He continued to demonstrate his commitment to community by his service on numerous local boards, including the Saginaw General Hospital Foundation (chairman,1988-1990), Covenant Healthcare Foundation, Temple B’nai Israel, Jewish Welfare Federation of Saginaw, Tri-Star Trust Bank, and First State Bank. In 1997 he was awarded the Community Service award of the Saginaw County Bar Association. At the national level, he was one of the original members of the United Jewish Appeal Young Leadership Council. A long time member of Rotary International, he was named as a Paul Harris Fellow, the prestigious Rotary acknowledgement for his service and fellowship. An avid collector of stamps, coins and art, he was a partner in Philatelic Appraisal Company. Married for thirty-seven years to Betty Goldstone before her death, he was then  married to Attorney Frumeth Brenda Hirsh since 1986.