Chicago, IL WW/Press/December 8, 2015 –Robert S. Fakhouri, Attorney at Goldberg Weisman Cairo, was selected for inclusion in The Top Attorneys of North America 2015-16 edition by The Who’s Who Directories. 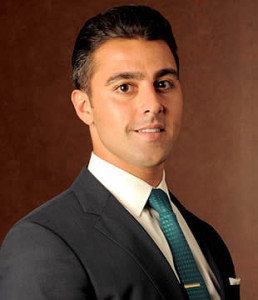 Robert Fakhouri graduated with a certificate in criminal litigation and earning four CALI Awards for the highest grade in legal writing, trial advocacy, and other legal courses. Robert worked as a judicial intern for the Honorable Judge Ronald Bartkowicz in the Circuit Court of Cook County. He also worked as an Illinois Supreme Court Rule 711 Intern with the Cook County State’s Attorney’s Office. He was assigned to the Felony Trial Division where he was responsible for handling felony matters both before and during trial. Robert is particularly interested in litigation, winning awards nationally for both trial advocacy and legal writing. He is one of the youngest to be admitted to the Illinois State Bar at twenty-three years old. Robert received his B.A. from Loyola University of Chicago and his J.D. from Chicago-Kent College of Law, 2013. Robert is a member of Illinois State Bar Association and the Chicago Bar Association.

Be the first to comment on "Top Attorney – Robert S. Fakhouri"